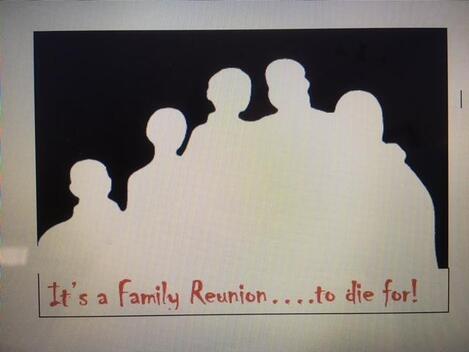 THE FORT held their 2ND annual Mystery Party with the theme “Malachai Stout’s Family Reunion,” originated by PlayingWithMurder.com. at St. Paul’s Lutheran Church Parrish Hall in Lexington on Saturday, October 20, 2018.  Nearly 50 attendees played members of the largely dysfunctional Stout family who gathered at the “family summer estate in the Georgia Mountains” for their annual reunion hosted by Winifred and Malachai Stout.  None of the Stouts get along particularly well with each other, but the promise of a substantial inheritance encourages them to put on their friendly faces and reluctantly attend the yearly gathering.

The evening began with news that the host and patriarch, Malachai Stout, was discovered dead in his study on the second day of the weekend reunion.  A violent storm during the night marooned everyone inside the family mansion with the bridge and road to town washed away and no power or cell reception.  Family members took turns making comments and giving clues to cousin and PI Evi Dents, played by Spencer Johansen, and his selected cousin “inspectors” (Larry McGuire and Roland Frerichs) who conducted the investigation until help could be called.
​
The family members gathered at tables with their next-of-kin including the stately widow Winifred Stout (Gina Roberds),  the workaholic businessman son Mortimer Stout (Mike Heuer), the snooty daughter Penelope Stout Clarington (Lois Daniel), the Las Vegas son Harrison Stout (Dan Henderson) and his drinking – card-playing bunch, youngest daughter Monica Stout Petty (Pati Pease) whose whole family was obsessed with pets,  crazy Uncle Edwin Stout (Norm Hiser), and Sebastian, the butler (Arved Larsen).

After 3 rounds of clues and comments, each table presented their conclusion as to who committed the murder.  The prime suspect turned out to be the butler’s mysterious sister, Anastasia (Donna Larsen).  But just as Evi Dents was ready to turn Anastasia over to the authorities, a surprise confession came from the real culprit – Malachai’s own 99 year old mother- Great Grandmother Stout (Grace Heuer) who shouted, “I gave him birth and I ended his time on Earth!” explaining Malachai had become evil and attempted to kill her with rat poison.   Creativite costumes, lots of laughs, and impromptu moments made for an enjoyable evening, and enough funds were raised to update THE FORT’S technology, too! A big “THANKS” to all who supported our night of community fun!
MYSTERY PARTY HISTORY:
2017 - MYSTERY AT WORTHINGTON MANSION
2018 -MALACHAI STOUT'S FAMILY REUNION
2019 - THE CALHOUN CITY CAPER
2020 - not held due to virus shutdown