Undocumented early writings tell a tale that early settlers were walking through this area not far from the ancient Kickapoo Village and noted “what appeared to be a huge hive in the top branches of one of the trees.”  Although puzzled at the strange sight, using their axes they soon felled the tree and were able to examine the object.  It was made of bark, covered with vines, and about the length of a man.  They pried into a section and found it hollow, but when looking deeper they discovered a quantity of bones.  A local doctor was summoned and pronounced the bones to be those of an Indian, placed there many years ago according to the burial custom of their culture.  This group of curious pioneers then returned to the spot where they had felled the tree, cleared a space, and buried the remains near where it had originally been placed.

As the years passed, an acre plot was squared off using this Indian grave as the center, and a cemetery for white pioneers was established.  Today the exact place of the Indian burial is not known, the cemetery grew, and the marker for the Indian grave rotted away, all signs disappearing.  This place now became known as the Indian Cemetery.

The first documented white person to be buried here was Coonrod Haner who died in November 1836.  His grave marker is still present, but nearly unreadable just as it was when first uncovered.  Coonrod was one of the sons of John C. Haner (1772-1846) who was an early settler to the timber of the Mackinaw arriving in 1828.  He came from Fayette County Ohio with not only his wife and sons, but the extended families of Flesher, Brumhead, and Downey, all of whom had intermarried.  He built a sawmill on the Mackinaw, near the rich resource of timber and sawed many logs to create homes for his friends, family, and neighbors.  Interesting stories of these families can be found in “Good Old Times in McLean County Illinois” by Dr. E. Duis published in 1874. This book describes that “twenty white persons lived here in 1828 and nearly 15-20 times as many Indians of the Kickapoo tribe.”

A family oral tradition states that Allen Haner, son of Reverend John Haner, was buried here in 1830 although there is no further evidence to confirm this burial.  It is most likely that deaths and burials took place following the arrival of the extended Haner family in 1828 and the confirmed burial of Coonrad Haner in 1836; but again no grave markers or records can be found.

Through the years the descendants of these pioneer families cared for this early burial spot where their loved ones rested as evidenced by a newspaper article dated 1899.  It states that “every year on the first Saturday after the 4th of July, all families of those interred in the Indian Cemetery never fail to meet, mow the weeds, repair the fences, and give the cemetery a general cleaning up.”

As Scrogin Cemetery was established in 1850 and later Lexington Cemetery in 1866, Indian Field Cemetery became little used.  As the years passed by so did the offspring of the early settlers pass away, and no one was around to care for this little burying ground.

In 1965 through the efforts of the Lexington Genealogical and Historical Society spearheaded by Verda Gerwick, Sandra Clark, and Helen Patton and aided by a host of volunteers this untended cemetery was restored and recorded.  Brush, weeds and grasses were cleared.  The area was probed, and twenty-three submerged headstones were located, raised and reset.  Photographs were taken and a record of these burials was created.

On 6 January 1986  Molly Jane Breese, the infant daughter of John and Sally Breese, passed away and was buried in this place.  And this has become the last burial in Indian Field Cemetery.

And now today, 130 burials are recorded for Indian Field Cemetery which remains within a grove of trees surrounded by fields on Section 20 of Lexington Township.  There is no paved access, so permission must be obtained prior to a visit, preferably in the fall after crops have been harvested.  It is located by traveling south on Lexington’s Pine Street 2 miles from town and can be seen in the wooded area to the west. 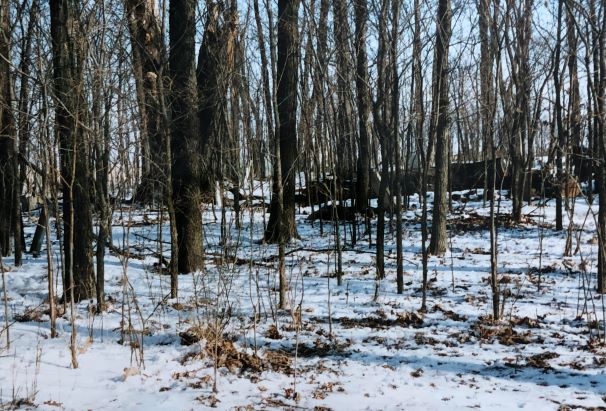 Use link to visit this Cemetery on Find A Grave:
https://www.findagrave.com/cemetery/1960590/indian-field-cemetery
Support Us