LEXINGTON-EARLY BEGINNING
On 27 November 1835 James Brown and Asahel Gridley purchased 80 acres from the United States of America at a land sale in Danville, Illinois.  This parcel of land would become the village of Lexington, which Brown and Gridley platted on 14 January 1836.  Lexington was chosen to be the name of this new town; since Mr. Brown had lived near Lexington, Kentucky and Mr. Gridley had ties to Lexington, Massachusetts; both had fond feelings for those cities.

Asahel Gridley and C. Carpenter erected the first building in Lexington during the winter of 1836, this was a store built on the north corner of Main Street and the public square.  Mr. Carpenter stocked it with goods from St. Louis.   The panic of 1837 affected all business, especially real estate, and Carpenter’s store did not flourish, nor did the village of Lexington. Carpenter’s goods were moved to Bloomington and the building moved to Clarksville.

The second building in Lexington was the double log house erected by Jacob Spawr.  Jacob had migrated to Money Creek Township in 1826, married, and lived there until moving into Lexington in 1836.  This building served as a post office, dwelling, and a tavern; and so, Mr. Spawr was a postmaster, a farmer, and an innkeeper.  Spawr’s tavern became a favorite stopping place for lawyers and judges on their way between court in Pontiac and Bloomington.  Many notable men of the day were guests of Jacob Spawr:  Abraham Lincoln, Judge David Davis, Stephen Douglas, Asahel Gridley, and many litigants and witnesses for the court.  Jacob died 20 August 1902 at the amazing age of 100 years 6 months and 26 days old.
​
Growth was slow at first, but houses were built by William Brown and then William Lamarr.  Charles Tilbury became the first blacksmith in town, building his house and log cabin blacksmith shop.  Charles died 11 December 1850, at the young age of 40, leaving a wife and family.  He was buried in Indian Field Cemetery; his wife and children joining him there later.  J.C. Mahan erected a business in town, located on the north side of the public square.  Dr. Abbott Goddard, Lexington’s first physician, in 1836 built the third business in town on the east side of the public square.  Dry goods were sold here, and Dr. Goddard also served as a preacher in the Methodist church and a medical doctor; his practice extending to Fort Clark (Peoria) to the west, Ottowa to the north and east to the state line. 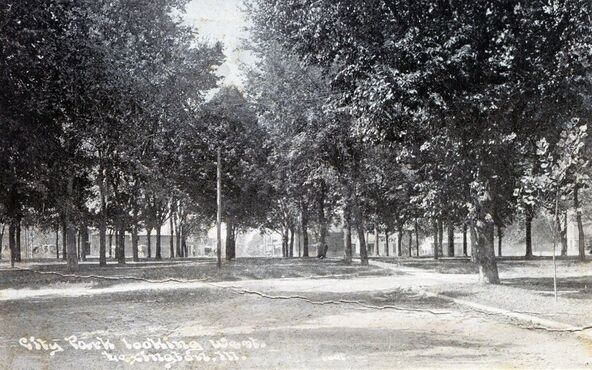 Growth was slow, yes, until the railroad chose a pathway that went right through the sleepy town of Lexington.  The first train came to Lexington, on 4 July 1854, and with it came the grain trade.  Until this time grain must be hauled to Pekin, Peoria, or Chicago.  With the coming of the railroad also came prosperity, as noted; “With the railroad came improved methods of farming, better plows, better means of harvesting grain, and better prices for grain.”  (History of McLean County 1879) 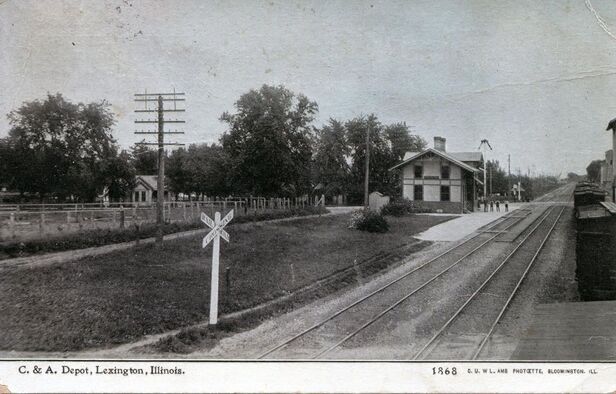 With the building of the railroad came a large number of laborers who were employed in its’ construction.  They needed housing and they purchased goods in local stores.  After the completion of the railroad many of these men and their families became permanent residents of the town.  At once hotels, stores and shops became a necessity, the population doubled.  The surrounding country also started to “fill up” and additional trading facilities were needed.  For a time, everything seemed to contribute to improvement.

On 12 July 1855 it was voted to incorporate Lexington as a village.  This first election was held at Dement’s store where 30 votes were cast, and John Fulwiler was elected first president of the board of trustees; who were Jacob C. Mahan, Malcom Magill, George T. Dement, and Crogan Dawson.
​
A Lexington business directory of 1860 indicated a bustling town, included were:  6 general stores, 4 grocery stores, 2 drug stores, a hardware store, 2 furniture stores, a jewelry store, a lumber and building store, 3 blacksmiths, 4 carpenters, a newspaper, 3 hotels, 6 physicians, and 2 lawyers. 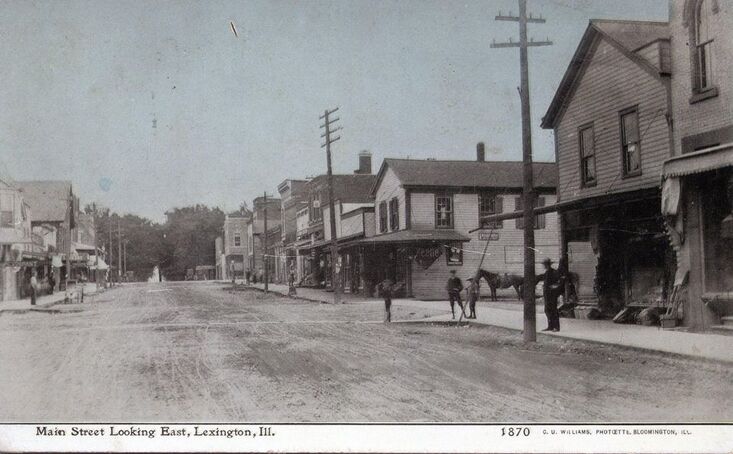 An era of hard times which came in 1857 and the breaking out of war in 1861 checked the development of Lexington.  Following the end of the war, money was plentiful and once again business was brisk.  A description of Lexington written in 1874 states: “This town is located on the Chicago and Alton Railroad, in the midst of a rich farming district.  It is a handsomely built place, and contains several large dry goods stores, two banks, two flouring mills, a broom factory, a cultivator factory, a brick yard, and a nursery.  The citizens are largely interested in stock raising and shipping.” (Atlas of McLean County 1874) 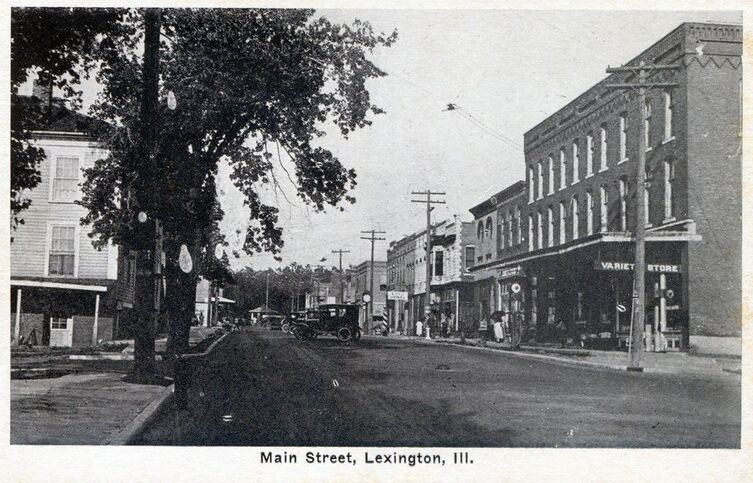 Further history of the Lexington community can be told through her cemeteries, her churches, her schools, and her businesses.  The people who organized and supported the churches, who attended and taught the schools, who developed and ran the businesses, and whose obituaries tell of their lives can shed valuable insight into those who lived in and loved this village of Lexington.
Support Us