In 1866 James Porteus, a patriot and a soldier newly returned from the Civil War, founded a cemetery on the northwest side of Lexington and named it Porteus Cemetery.   Mr. Porteus advertised, sold lots, and remained its sole owner until his death on 12 January 1887.  At the time he was laid to rest in his own cemetery, the ownership passed to his wife and only heir Hetty.

At this time Lexington’s first cemetery, nearby Scrogin, was becoming full and there was concern that future family members would have no room to be buried with their loved ones. Lots were purchased and family members were moved to the new cemetery to ensure that families could rest together in this new burial place.

It is difficult if not impossible to determine the first burial in Porteus Cemetery.
Tradition states that the first burial in the area which was to become Porteus Cemetery was Maria Louise Sample Mahan, wife of Dr. Alexander S. Mahan.  Maria died 7 November 1860 and her son Jacob A. Mahan died soon after on 5 December 1860.  This Mahan family had migrated to McLean County in 1842 and their family eventually grew to ten children.  Following these deaths, the Mahan family moved to Missouri and later many of them moved on to Kansas.  Alexander was brought back to Lexington for burial next to his wife and son in 1870 on Section 4 Lot 104.

If this early burial of 1860 was in fact the first, then it is possible that Mr. Porteus allowed Civil War deaths, whose remains were shipped home to Lexington, to also be buried in this place.  James E. Beem (1847-1864) died at age sixteen in the service of Company E 94th Illinois Infantry.  Since he may be one of the earliest burials in Porteus, it is interesting to note that his grandfather, Enoch Beem, was the second to be buried in nearby Clarksville Cemetery.  Another strong possibility for early burial here is Joseph A. Hefner (1847-1864). He was also a young member of the 94th who died in battle, and was the great grandson of General Joseph Bartholomew, a noteworthy veteran of many wars, also buried in nearby Clarksville Cemetery.  Clearly these early families knew each other back in Indiana and had continued to be together even in battle, in death, and in burial.

Many of Lexington’s early families such as Mahan, Spawr, McMullin, Blake, and Champlin indicate death dates beginning in 1850.  It is believed that these early deaths were first buried in Scrogin, and then moved sometime after Porteus opened in 1866.  It is definite that Ella Scrogin was the first death in the city of Lexington on 16 July 1850, and three more siblings and her father Levin were first buried in Scrogin.  It is also known that they were all moved to Porteus where they have a large family burial plot in Section 7 Lot 230.

The first deaths noted to be buried in Porteus following its foundation in 1866 were that of William and Elizabeth McAboy Dishon. They are buried in Section 1 Lot 181.  Elizabeth’s family arrived in McLean County in 1834.  While her father John McAboy is buried in DeWitt County, two of Elizabeth’s sisters Sarah Gray and Mary Camfield are buried in Lexington Cemetery as well.

Francis Abbott Goddard who died on 24 December 1866 was perhaps the third burial in this new place.  His father Francis A. Goddard is buried in nearby Clarksville Cemetery along with his daughter Lydia.  Francis’ mother, Adaline Hefner Goddard remarried Samuel Dawson and is buried in Lexington with her second husband.

Civil War and Andersonville Prison survivor Jacob Hiser lost his wife who died during his absence and may well have been one of the first to be buried here.  Mary Elizabeth Salter Hiser is buried on a Hiser lot and while her date of death is unknown, it is believed that she died around the time Porteus Cemetery came into being.

In 1888 Porteus Cemetery was platted and thereafter became known as Lexington Cemetery, most likely following the death of James Porteus.   A cemetery association was formed to oversee its care and upkeep.

Over eighty veterans who fought in the Civil War are buried in Lexington Cemetery.  The Lexington Legion Post # 291 places flags every Memorial Day on their gravesites as well as on the graves of the veterans of all other wars since that time and are too numerous to mention.

The mausoleum known as Stewart Abbey was the “almost” final resting place for forty-two people.  This structure was a prominent feature of the cemetery until 1961.  At that time, it was determined that the cost of repairs was prohibitive, and the mausoleum was razed.  The people entombed in Stewart Abbey were reinterred in Lexington, Pleasant Hill or Gridley Cemetery.

On 1 April 1952 Lexington Township assumed management of the cemetery, which allowed taxes to be levied to support its’ care and maintenance.  Lexington Cemetery continues to grow, and new sections have been added through the years as the need arose.

Today nearly 4,000 burials permanently rest in beautiful Lexington Cemetery with its rolling hills and majestic trees.  It is easily located on P.J. Keller Highway just west of the city of Lexington. 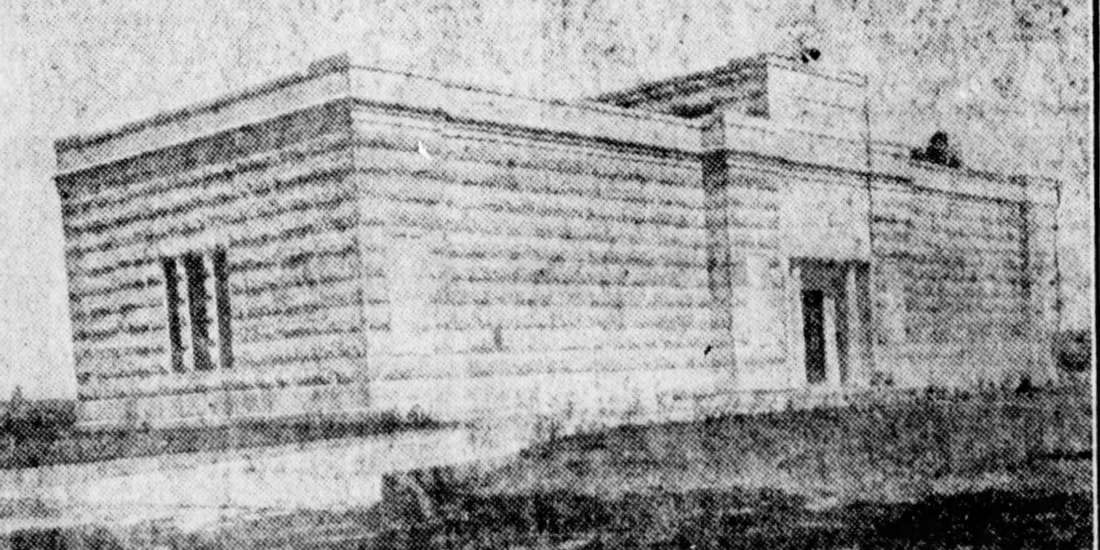 Stewart Abby 1916 - 1962
Use link to visit this Cemetery on Find A Grave:
https://www.findagrave.com/cemetery/1960559/lexington-cemetery
Support Us