​Resource: THE STORY OF MCLEAN COUNTY AND ITS SCHOOLS by W. Brigham

Early settlers who came to the groves of McLean County from pioneer settlements in other states in the 1820’s and 1830’s needed some form of schooling for their children.  Subscription, or private, schools were soon opened in log cabin homes, with parents willing to pay a set amount for the education of each child, often taught by young men or women with only a year or two more schooling than the pupils they taught.  In 1825 the Illinois Legislature passed a law to establish free schools, but the law was opposed and finally repealed, because pioneer citizens were not in favor of a tax to provide education for other people’s children. After 1937 the Illinois State School Fund was created by collecting the interest on sales of public lands, and in each township the sale of or income from the 16th section of land comprised the Township School Fund. These small amounts could be increased by local taxation if approved by the voters, but only a small part of the cost of maintaining schools was thus raised.  Early log cabin schools were built by personal contributions, and they not only housed the school but were used for religious meetings and neighborhood gatherings.  Pioneers deserve much praise for creating these early schools in McLean County.

Population boomed in 1850’s and new laws provided for school districts and school boards with local power to levy taxes, erect buildings, and hire teachers.  In most settlements and towns and cities the number of students demanded investments in multi-room elementary schools and often separate buildings for the high school.  But in rural areas distant neighbors pooled resources to provide a one-room school within walking distance of most children.  In a few years new one-room school buildings dotted the landscape of the entire county.  Many new state education laws set restrictions on distributions of money, standards for buildings and equipment, teacher qualifications, and courses of study.  The one-room schools thrived for 50 years!
​
Though one-room schools were serving adequately to educate children and provide a center of neighborhood social life, consolidation of rural schools was frequently discussed in the early 1900’s, but road conditions for many years prevented any possible transportation to distant centers even if larger units were organized. 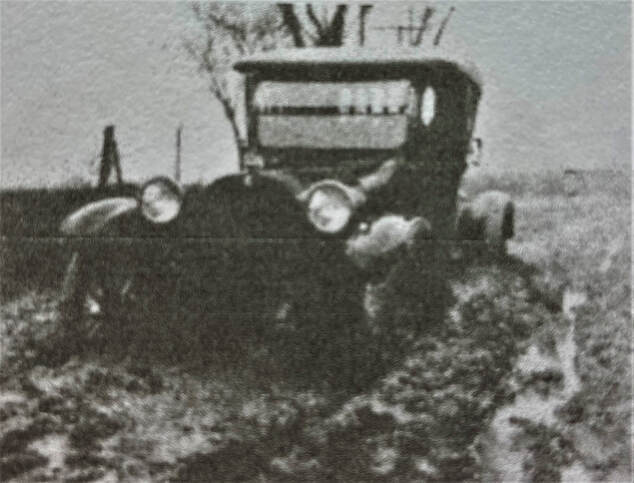 In 1945 state law forced studies to survey 230 one-room schools in McLean County for reorganization.  Findings showed many schools with small numbers of children, teacher shortages, and buildings in need of extensive repair.  School consolidations followed, and many small village schools joined with surrounding rural schools to form unit districts to include grades one through twelve.  Transportation by school buses on vastly improved county roads was an important key to the success of the reorganizations.

Many unused one-room buildings were sold at auction, so that today all but a few of the little one-room schoolhouses have vanished – torn down, moved away, or been remodeled as a dwelling and often unrecognizable as a former school. Here is a summary of twenty of the rural schools from that era that joined the Lexington School District in 1948.

Bishop School – The first school in Money Creek was a double log cabin built in 1837 on the north bank of Money Creek in the southeastern part of Section 29.  In 1868 the school was rebuilt on the southwest corner of Section 29, where the Towanda Township Road Quonset shed now sits, just west of Bishop Cemetery. 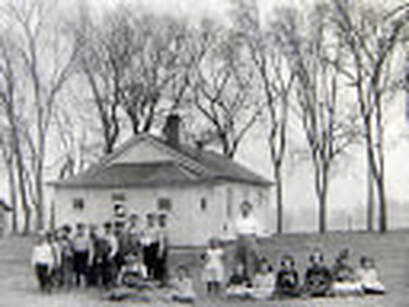 Frog Alley School – Built first in the 1860’s east of the railroad at the south side of Section 27 and named for the location’s low swampy area.  The land was drained and now provides some of the richest farming land in Illinois.  Rebuilt in the 1890’s, the old Frog Alley School location is now the home of the Grunloh family. 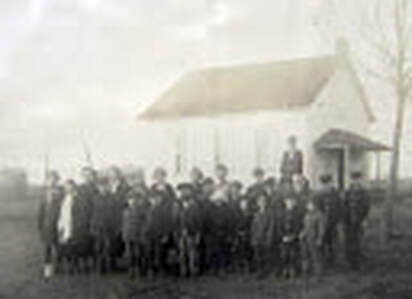 ​Hefner School – Established in the 1890’s, and rebuilt in 1908 with a basement and proper lighting, it was called the “finest frame school building in the county.”  It is located 80 rods from the west side of Section 14 on the south side of the old Bloomington-Chicago Trail.  The old school is now the modern home of the McAvoy Family. 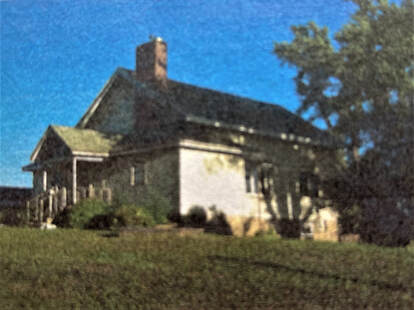 Trimmer School -  First built in 1856, moved in 1868, and destroyed by fire in 1883, the new school was located in Section 20 of Money Creek Township.  It was completely remodeled in 1914 to include a library, kitchen, basement, indoor toilets, a stoker furnace, and indirect lighting.  The schoolhouse was sold in 1949 to the township, to be used as the Money Creek Town Hall and Community Center for meetings and a polling place.  The township auctioned it in 1999, and the old school is now a private home. 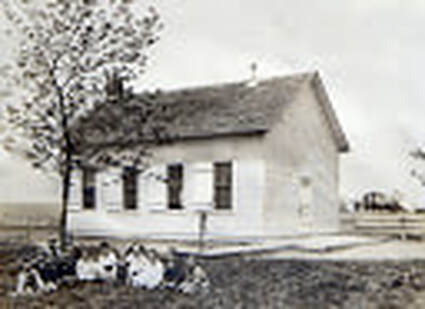 Wilcox School – Built on the hill in the early 1950’s and rebuilt after the Civil War, the school was named Wilcox after the father-in-law of A.A. Stewart and the location was near the present farms of the Stewart family east of Lake Bloomington on Section 5 of Money Creek Township. 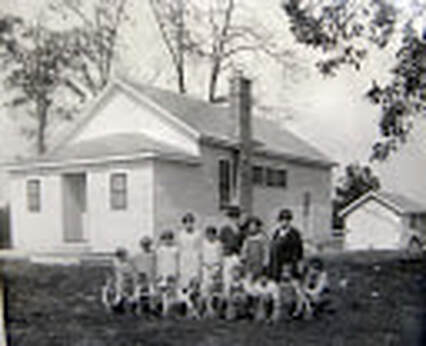 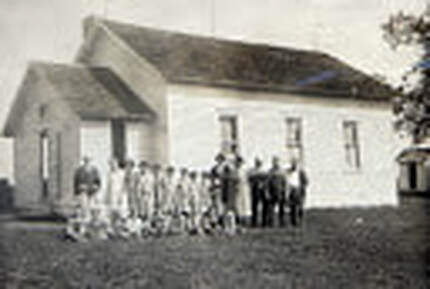 Popejoy School – First built on the southwest corner of Section 19 in Lexington Township on Popejoy land, the school was destroyed by fire in 1937 but was replaced the same year.  No building remains, but the site was south of the Dameron Farm. 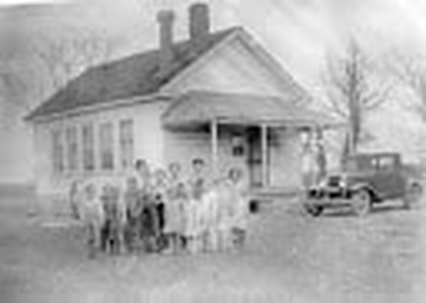 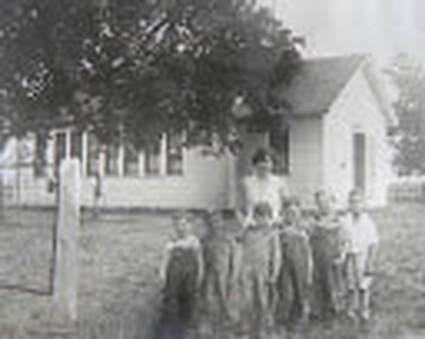 ​Adams School – built by pioneer Matthew Adams near his homesite and cemetery on the north side of Section 34, it burned in 1941.  No building remains at that site.
​Mt. Gilead School – Located on the southeast corner of Section 26 and named by the teacher who was from Mt. Gilead, Ohio.  Its location is about a quarter mile from Mark Freed’s house and is still occupied. 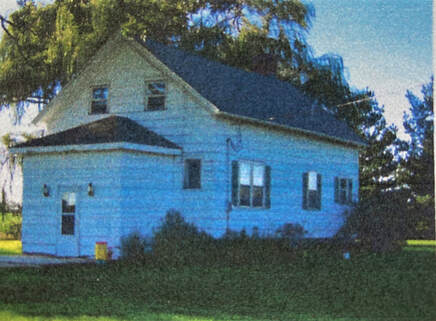 ​Pleasant Hill School -  First school in Lexington Township originally built in 1832 at the Patton Settlement in Section 21.  By 1857 the school was a two-story building located on the southwest corner of the village of Pleasant Hill and was called “The Academy.”  By 1890 a new building was constructed and was one of the largest one-teacher schools in McLean County. 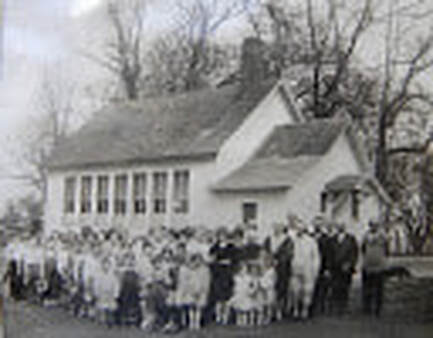 Cross Roads School -  Originally known as Johnson School the present site was purchased in 1872 for $50.  The new modern brick veneer building was built in 1928 at the northeast corner of Section 9 in Lexington Township, and is now a pleasant, modern home platted to Jeff Alexander. 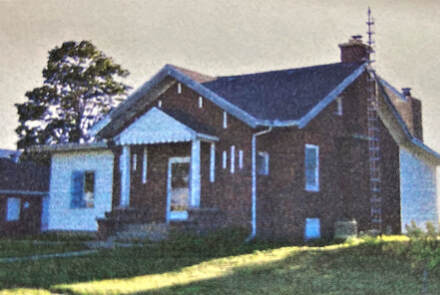 Crumbaker School -   Named for William Crumbaker who lived across the road to the east, this school was built in 1867 and remodeled in 1890 at the center of the east side of Section 14.  The building is still there, but trees have almost hidden the school building and it looks to be in need of some TLC. 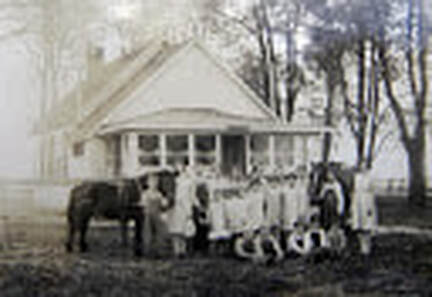 Prairie Hall School – First built in 1855 on the open prairie ½ mile north of the southwest corner of Section 1 of Lexington Township by the Lindsay Family.  They often had to plow furrows around the building to keep prairie fires away from the school.  It was used by the community not only as a school, but as an all-purpose meeting building.  It was replaced in 1906, but it burned in 1947.  It would have been located near the present day home of the Roseman Family.

One-room Schools from Lawndale, Chenoa, and Gridley Townships that became part of the Lexington School District #7 in 1948 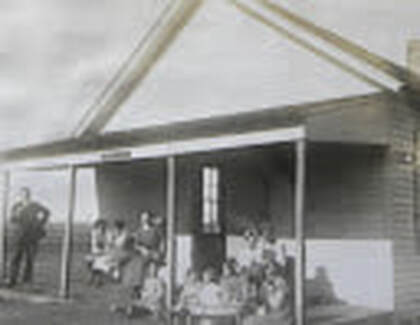 Leonard School -  built just a half mile out of Lexington Township and 40 rods from the south side of Section 18 of Lawndale Township on land given by Patrick Leonard.  The school population was divided between Colfax and Lexington at consolidation in 1948.
Buck Creek School – a frame building on boulders was located in the 1850’s in the northeast 40 acres of Section 34 in Gridley Township south of the bend in Buck Creek.  In 1888 the site was moved one-half mile northwest on the west side of the road.  It was known as one of the best equipped schools in the county.  This school was divided between Gridley and Lexington in 1948.
Payne School – Built in 1867 and remodeled in 1919, it was always kept in excellent condition.  Located on the north side of Section 31 in Chenoa Township it was consolidated into Lexington School District.  The building was a family home for many years. 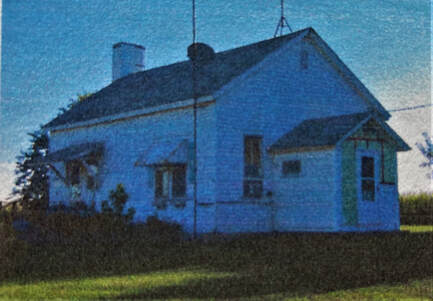 Ballard School -  Named after the Ballard train station and grain elevator, this school was built in 1865 after the Civil War.  It would have been located in Section 22 of Chenoa Township and was moved several times over the years.  The Ballard School population was divided between Chenoa and Lexington at consolidation in 1948. 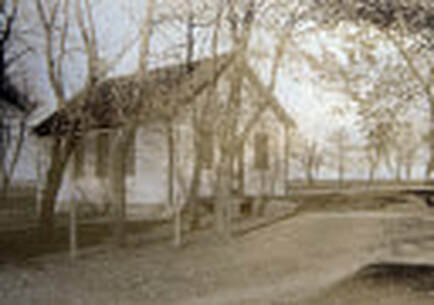 ​Enterprise School -  Many landowners donated acres of their land for school sites, but those in this district, evidently, did not feel that the school was necessary, so in 1867, when $25 would have been a fair price, the 2 acres at the northeast corner of Section 19 cost the district $200 – making the building of the school a real enterprise – thus the name of the school!  It was the first school in the township to be improved and standardized, but the building burned in 1947 and the population of the school was divided between Chenoa and Lexington at consolidation.

History has disappeared right before our eyes as these old schools passed away.  We hope this visit to the old schools has rekindled some memories or helped explain a little about the “good old days” of early education in this part of central Illinois.
Support Us