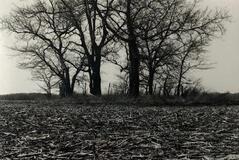 It is not surprising when one views the first burial in each of the eight Lexington area burial grounds to note that they are either women of childbearing age or infants and children.  Life on the frontier was harsh and medical care had not yet developed into the science that we enjoy in this century.  Many childhood diseases which today are preventable, in that day devastated infants and children. Women died often due to complications of childbirth, attended only by older experienced women.​
The first deaths and burials said to occur in this area around the Mackinaw were children of Aaron and Sarah Patton Foster in 1829. They were buried in what would become Pleasant Hill Cemetery, sometimes known as Selma Cemetery.  The Patton and Foster families are given credit for founding this cemetery in 1830, the area’s earliest.    John and Margaret Wiley Patton are well known early settlers to this Mackinaw area and Sarah, their daughter, had married Aaron Foster before they migrated westward.

Also, along the Mackinaw but farther west occurred the death of Elizabeth Bartholomew Epler on 22 January 1831.  Elizabeth, daughter of war hero Major General Joseph Bartholomew, died giving birth to her first daughter Elizabeth.  This was the first burial in what would one day be known as Dawson Cemetery, named for a one-time owner of this Money Creek property and War of 1812 veteran, James R. Dawson. (1794-1848) Mr. Dawson had migrated from Madison County Ohio using a team of oxen which took 21 days.  Many of his descendants have populated Lexington area cemeteries.

Clarksville Cemetery located a little north of Dawson, also in Money Creek Township, was established with the first burial in 1835 of little three-year-old Helen Wallace.  Her father George had built a “flouring mill” on the waters of the Mackinaw nearby which was dependent upon the flow of water for power.  Periods of drought contributed to its’ demise, so Mr. Wallace then turned his efforts to farming.

Interesting Indian Field Cemetery located just a short distance south of Lexington is the next area to be used for burial during this pioneer era.  Coonrod Haner, son of John C. Haner, died 12 November of 1836 and was the first white settler to be buried in what was already known as the Indian cemetery.  Folklore tales state that 5-6 Kickapoo Indians were buried on this hill or mound within a grove of trees not far from the Mackinaw.  Many of the large extended Haner family is buried here as well as in nearby cemeteries.

Tiny Adams Cemetery located near a creek south of Pleasant Hill was the next place used for early burials.  Jane Black Adams, wife of pioneer Matthew Adams died on 4 September 1839 at the age of forty-seven years.  Mostly Adams family members are buried here, which once again today is overgrown with grasses and weeds and located in a field with the grave markers hardly visible.

Scrogin Cemetery, now within the city limits of Lexington, but then was located on the rural property of Levin P. Scrogin.  When his young daughter, Ella Scrogin died on 16 July 1850 she was laid to rest near the home of Levin and Sarah on a small hill.  This was the beginning of a cemetery that the Scrogin family allowed neighbors to use to bury their loved ones for many years.

Soon after, the area of south Gridley Township saw the death of 5-year-old Harriet McNaught who died on 4 April 1852. Parents Joseph and Agnes McNaught wished to bury their small daughter nearby on their own property on a small rise and thus began what would become known as the McNaught Cemetery.
​
Lexington Cemetery is the largest and the last cemetery to be established in the area.  It was founded in 1866 by returning Civil War Veteran James Porteus (1835-1887) although it is thought that there were perhaps several burials prior to this noted date of origin.  Elizabeth McAboy Dishon may have been the first to be buried here.  She died on 2 April 1866, and her husband William died soon after on 27 August 1866.  They are buried on Section 1 Lot 181, an area which today contains many old grave markers, an indication that this was one of the earliest burial lots in Lexington Cemetery.
Support Us